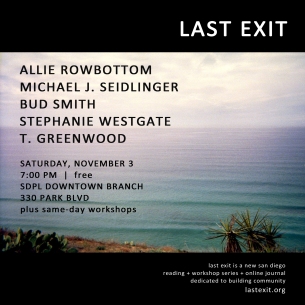 == about the readers ===
ALLIE ROWBOTTOM’S debut book, JELL-O GIRLS is out now from Little Brown. Her essays can be found in Vanity Fair, Salon, No Tokens, The Rumpus, and elsewhere, and received “notable” mentions in The Best American Essays of 2015 and 2016.Allie holds a PhD in literature and creative writing from the University of Houston, and an MFA from the California Institute of the Arts. She lives in Los Angeles with her husband Jon, French bulldogs Butter and Jammy, and Ham the Morgan horse.

MICHAEL J. SEIDLINGER is an Asian American author of a number of books including STANDARD LONELINESS PACKAGE, MY PET SERIAL KILLER, and THE FUN WE’VE HAD. He serves as Library and Academic Marketing Manager at Melville House, Editor-at-Large for Electric Literature, and is a member of The Accomplices. He lives in Brooklyn, New York, where he never sleeps and is forever searching for the next best cup of coffee.

T. GREENWOOD has published twelve novels, and received grants from the Sherwood Anderson Foundation, the Christopher Isherwood Foundation, the National Endowment for the Arts, and the Maryland State Arts Council. She has won three San Diego Book Awards. Five of her novels have been BookSense76/IndieBound picks. BODIES OF WATER was finalist for a Lambda Foundation award. Her twelfth novel, RUST & STARDUST, is out now from St. Martin’s Press. She teaches creative writing for San Diego Writer’s Ink and online for The Writer’s Center. She and her husband, Patrick, live in San Diego, CA with their two daughters during the school year and spend their summers at her family’s camp on Newark Pond in Vermont.

STEPHANIE WESTGATE is Last Exit’s editorial apprentice, and is the former lead poetry editor for Grossmont College’s literary Magazine THE ACORN REVIEW. Stephanie is a trans poet, and is super influenced by comics, and has work forthcoming in MADWOMEN ETC and poems in THE ACORN REVIEW.

LAST EXIT is a new project in San Diego dedicated to showcasing local and visiting writers, providing low-cost workshops and readings to San Diego, and building community through editorial apprenticeships. LAST EXIT is so happy to partner with the Library Shop.